Cliche came home today. She has two little shaved spots, and she looks a little thinner, though she seems very happy to be home. She curled up next to me on the couch. She’s on little kitty medications for a bit — and she just LOVES taking her meds. Last time we had to give her banana-flavored antibiotics. Apparently, they don’t make flavors for cats. It’s just the human stuff. In truth, everyone knows cats are bananas about banana.

We are just glad to have our little girl home. Tillie seemed fairly unfazed, though she liked having the couch to herself yesterday. She was extra snuggly while Cliche was gone. She actually gave a little cry as we gave cliche her medicine today. Sympathy?

I realize it has been awhile. And it’s not Friday. But here goes:Here is a picture of Cliche by her favorite piece of furniture in the house — the cat fountain. Does that count as furniture?

Then we have a picture of Tillie by her favorite piece of furniture (well, perhaps not her favorite) — one of our new dining room chairs: 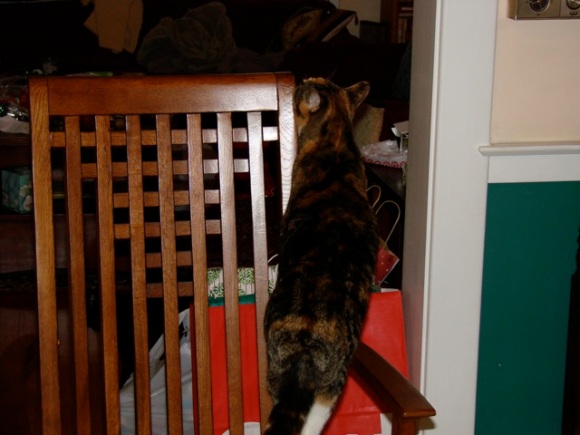 I know it breaks tradition a bit, but I just couldn’t wait till Friday!

Here is Cliche sitting on one of the favored perches in the house — the bay window over our kitchen sink. Since they are not allowed on the counter, we do not know how they get up there. 😉 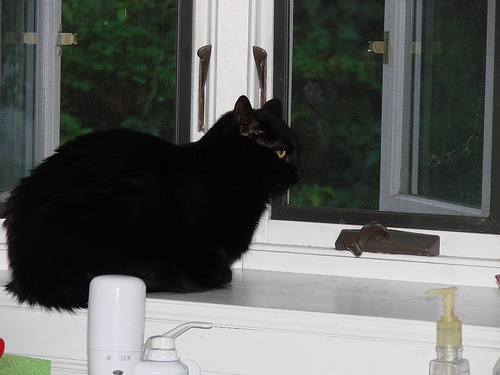 And here’s one of Tillie. I’d been trying to get a close up of her face, because she has beautiful markings, not that I’m biased or anything.

I mentioned to Sujal this morning that it would be funny to do Friday Ratblogging. He said it was disturbing because a) just the concept grossed him out and b) he’d be really freaked out if I could find a rat (esp. in the house) to photograph. So I had to do a quick Google search and there are a lot of ratbloggers out there. Frankly, I was hoping for photos of gutter rats, but what can you do?

It actually made me a remember a time in my life when I lived in a crappy little apartment in Minneapolis with my friend Roger. We had a lot of pets at the time — most of them 6 legged that ran when you turned the light on. But one day I came home from work to find Roger in the most foul mood ever. He’d seen a large rat in the apartment, and he had had enough. We were just about to leave for a stint of house sitting at a MUCH nicer place than ours. Several days later, he informed me that it must have been a Norwegian Rat, which made me laugh endlessly, because suddenly Roger was a rat aficionado. Thus completes my rat experience. If I’d had a photo of that Norwegian rat, I’d post it.